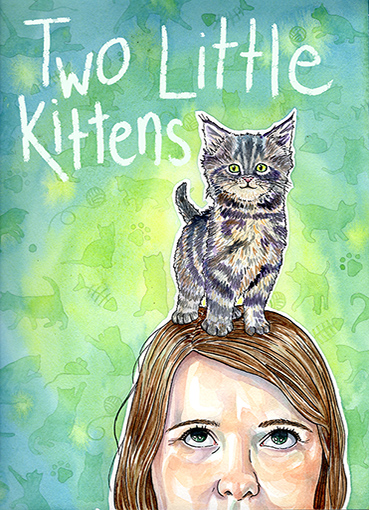 Above Bounds invite you inside from the storm to watch as our tale unfolds. Can two unlikely companions learn to share and play together, or will one end up outside on their own?

Two little kittens, one stormy night,
Began to quarrel, and then to fight;
One had a mouse and the other had none,
And that's the way the quarrel begun.

Above Bounds invite you inside from the storm, to watch as our tale unfolds. Can two unlikely companions learn to share and play together, or will one end up back outside on their own? With visual comedy, interaction and lots of laughs - Two Little Kittens is the perfect first introduction to theatre for under 5’s and their families.

About the Company:
Above Bounds are an emerging theatre collective founded in 2015 by theatre-makers Helen Bovey and George Boundy. Based in Plymouth, the company aim to encourage engagement in the arts through a mixture of professional shows, educational workshops and community outreach. Their previous work includes Portrait (Rooted Moon International Theatre Festival, Sardinia), Traveller's Tales (At Fringe Theatre Fest in 2016) The Ugly Duckling & Other Tales (Tour, ACE supported) and The Elves & The Shoemaker (ACE supported in 2018), as well as producing the Above & Beyond Children’s Theatre Festival with Plymouth Libraries in 2018.
Above Bounds were participants on the Worboys Productions Theatre Farm Retreat, 2016. The Ugly Duckling & Other Tales was awarded the encoreinsure.com Brighton Fringe Bursary and nominated for the Balkan Otherplace Award in 2017.

About the show:
Two Little Kittens is a new show for under 5’s and a collaboration between Children’s Theatre Director James Woodhams and Above Bounds Theatre Collective. Inspired by the traditional 19th Century Poem ‘Two Little Kittens’, the piece explores play, communication and friendship in a physical and comical style. Using Above Bounds signature visual style, including puppetry, join us as we retell this tale of friendship and communication in a modern world.

“Fantastic-all the children were engrossed. The timing was just right, great level of interaction.”

"Loved how you encouraged the children to use their imaginations"

“So much fun. Best show I’ve taken my children to! Thank you!"

“Absolutely fantastic! Thoroughly enjoyed the show, as did my two year old. So creative and fun!"

"A wonderful thing to do as a family!" Exploring Exeter

If you are feeling unsure about bringing your little one to Two Little Kittens- here is some further information to help put your mind at ease. Please do get in touch if you have any further questions:

What is Two Little Kittens?

It is a 30 minute show involving 2 performers: Vicki Horan and Kane Mills. The performers will act out scenarios to tell the story of a girl and a kitten. The performers interact with the audience, so that everyone feels included in the journey of the piece.

Who is it for?

It is perfect for Under 5’s and even really little ones enjoy the piece as it is fast paced and colourful.

Is the piece loud?

For some, it might be- as it does involve live singing and recorded music. We make sure volume levels are tested before each performance so they are at a safe and manageable level.

Can I leave if my child doesn’t enjoy the performance?

We do not mind if you need to leave and re-join the performance at any time - every show is a relaxed performance. We expect every audience member to react in their own way. The team are experienced Early-Years performers.

Can we play with the props after the show?

Yes! There is a 15-20 minute guided play after every session, with props and music!