This Is Not Therapy 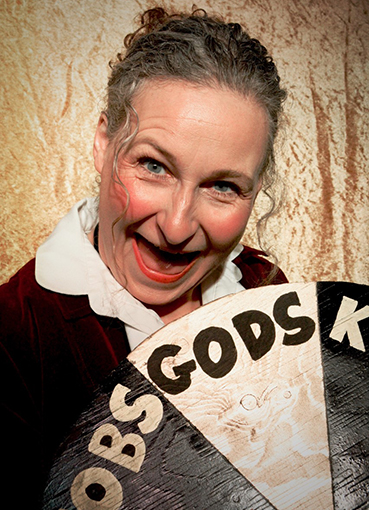 This Is Not Therapy

How do you make choices in a world that constantly pummels you with conflicting information?

Join Tina Sederholm as she spins her Wheel of Destiny in this part confessional, part game show (but definitely not therapy) quarter-hour. From careers, motherhood, traversing middle-age, or just discovering the best way to fold your socks, Tina has a story or poem to make it less of a crisis, and more of a celebration.

reflexions on making the pre-record...

"When Gill and Bill offered us a pre-recorded slot at Theatrefest, my husband Neil and I jumped at the chance. After all, we met making a film. And though it's been about five years since we made one, so both ourselves and our equipment are a bit rusty, we thought ’No problem.’

"We reckoned without almost constant rain throughout May. (We planned to shoot the majority of the film outside). Did not plan for our indoor venue to get flooded and then the alternative to stop taking our calls. When we got to shoot outside (guerrilla fashion in our local cemetery, most of which we didn’t end up using), did not reckon on the Red Arrows having a practice session over our village, or the number of farmers who would be harvesting. Did not plan on my elderly mother suddenly wanting to sell her home and buy another during a period when the housing market has gone mad. Did not plan for our recently amputated dog to get a cancer diagnosis. Forgot about how much last minute hassle there is with publishing a book (This is Not Therapy is also a book, coming out in July.), including typesetting checks, cover alterations, website upgrades... "All the time, thinking ‘Well, this is ironic because it’s sort of the subject of the film.' How nothing in life is neat and linear but comes flying at you from all directions.

But we made it. We got the film to Bill and Gill on time (just.) And it was so much fun to make. Of course now, we want to make it all again, but better. Which is pretty much what every artist, and every human being thinks, as soon as they finish a creative endeavour."