The Mask of Anarchy 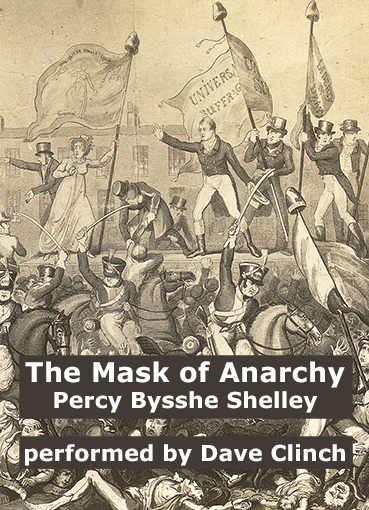 The Mask of Anarchy

In the July of 1998 I was at a meeting in London where the late Paul Foot spoke inspirationally about Percy Bysshe Shelley’s The Mask of Anarchy. He took us through the reasons why Shelley (who in 1819 was living with his second wife, Mary, author of Frankenstein, in Italy) had written this great 92 verse poem of protest, in ballad form, during a twelve day period of unbridled anger after hearing of the attack by the Cheshire Yeomanry at St Peter’s Fields Manchester on 18 August 1819 on a huge demonstration for democratic rights. Paul then read the poem brilliantly.

Eleven people were killed including two children. Hundreds were injured by the ‘bloody swords’ of the yeomanry. It became known as the infamous ‘Peterloo Massacre’. Paul Foot referred to Richard Holmes, the acclaimed biographer of Shelley who regards the Mask of Anarchy as ‘the greatest poem of political protest written in the English language.’ He also explained that Shelley, an avowed Atheist, used powerful biblical imagery and the ballad form, which ordinary working people would understand, to publicise his message.

As a tribute to Paul Foot, who died in the summer of 2004, I set myself the task of learning the poem.

I was waxing lyrical to my late friend Chris Ayliffe (who died in April 2017) about the Mask of Anarchy. I had some vague idea of arranging a performance. Without hesitation he said ‘I’ll put it to music’. It was a major task for him to arrange it, as he was deaf and did not read music, and also it required approximately 18 minutes of continuous guitar playing! For me it was an enormous privilege to be collaborating with Chris who had a great musical heritage. I perform the poem solo now.

A series of images, which we thought fit with the poem are projected as it is being performed.

The Mask of Anarchy has resonated energetically and angrily down the 198 years since Shelley first wrote it, as he railed against the outrageous attack on ordinary workers in Manchester demonstrating for the right to vote - ‘the torrent of my indignation has not yet done boiling in my veins.’

The murderous Lords Castlereagh, Sidmouth and Eldon are the ‘Anarchists’ of the poem who create chaos to keep order.

The Mask of Anarchy is a poem that demands to be heard - now.

The Mask of Anarchy is presented by The Piper Calls Project, in conjunction with the Monday Collective