Salt In The Wounds 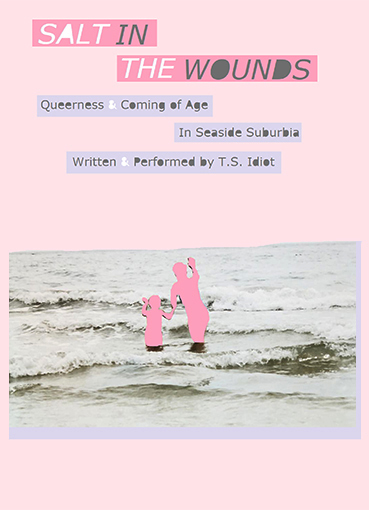 Salt In The Wounds

"When I consider how my light is spent,
Ere half my days, in this dark world and wide,
And that one Talent which is death to hide
Lodged with me useless, though my Soul more bent"

These are the words of John Milton as he wrote about his experience of losing his sight. In Salt In The Wounds, artist and poet T.S. Idiot considers a different idea of visibility - growing up in the suburban council estates of Torquay and their changing relationship with the coast and self identity. Drawing on their personal experience the artist reflects on themes of isolation, identity, visibility and self-acceptance as they queer the narrative of being assigned coastal at birth.

Salt In The Wounds / When I Consider How My Light Is Spent (working title) is an ongoing multimedia body of work, making its live debut at Fringe TheatreFest before a film and residency later in the year.

some mild language and mentions of mental health and sexuality

Salt in The Wounds is presented by T.S. Idiot, in conjunction with the Monday Collective

Does the choice of the material reflect the experience of the last 18 months - or is it in some way modified by that experience?

For this piece, I'm quite literally performing in isolation. I spent the first part of lockdown back in my childhood home, coming to terms with all the old feelings of teenage life on the South West coast. I wrote a lot about loss, and water, and finding parts of myself – so it made sense to perform these thoughts on my own with the same backdrop of concrete and waterways that had inspired the work.

2020 was going to be the year that I finally got into a ‘proper’ theatre space and learned the mystical art of having a proper rehearsal. Obviously, that didn’t go to plan so I've had to re-engage with my own rehearsal process and sit with the work, despite my limitations as a traditional performer. I have difficulty with processing and memory because of my mental health and ADHD, so rehearsing and learning lines in the typical sense isn’t really possible. Instead, I write and re-write my words, performing them at (online) poetry nights as well as using them in other projects (like a short film later this year). This means that they become familiar, they become mine – even though I'll still be reading them off a sheet. I also try to make this part of the performance – at Fringe Fest my poem will be read after I pull it out of the water in a bottle.

Have there been any unexpected good things about creating work in these strange times or has it only made things difficult?

Mental-health wise it has been really difficult. But there’s something about having to take yourself apart and build yourself from scratch which I think has been a benefit to my artistic practice. It’s been hard but I've had more time and space to sit with myself, to think about what I want to make and why I want to make it. Eventually, I think it’s made me value myself more and refuse to be in situations that don’t serve me, as an artist or a person. This last year and a half has also allowed me to connect with my identity in a way that hasn’t happened before, something that I talk about in Salt In The Wounds.